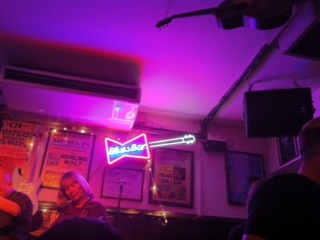 So tonight was all about the music, pure and simple. 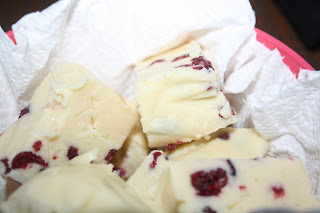 About the only saving grace from today - white chocolate and cranberry fudge. Very tasty, if not a little sweet. I saw the receipe while I was tidying up my little flat. Did a little dash to Waitrose (the only close supermarket open at 4.30pm on a Sunday) and 2 hours later - hey presto - the fudge had appeared.

And what of the morning? Another lie-in, listening to the rain. When I finally decided to get up and eat some porridge for breakfast, I notice that my bike has been moved from it's normal place, and why, because the roof is leaking again! The neighbours have kindly left a note and moved my bike.  So I walk around my little flat to find out if there is any evidence of leaking in my rooms and lo and behold, a little leak over the bathtub. Gutted...luckily the roofer type person arrives soon and 'fixes' the problem but all still disconcerting nevertheless.
Posted by Lenz at 17:26 No comments:

So I am back in my flat. The radio is on and Louis Thereaux is on the iplayer. I am back from and afternoon/evening on the SouthBank. Was a nice evening, I do wonder if I just come across as weird....And also I better get a better handle on Nigerian history. And I just wonder about people. I just wonder. This evening has, thrown me and I perhaps need to rethink - everything that has literally passed me by. I feel like I have wasted a lot of time with a lot of silly and irrelevant thoughts and activities. Well maybe these events are sent to test us and challenge the status quo.
Posted by Lenz at 15:16 No comments:


So this is the book that I am currently reading. It is a fascinating read! Thought that I might try and summarise some of the most interesting parts. I especially find it interesting because he talks a lot about Christianity as a Christian (albeit struggling to keep my head above water and not really managing...) it is interesting to hear/read about a dissection of 'my faith' from a considered perspective.

There is a nice little interview between Alain de Botton and Graham Lawton in the God Issue of the New Scientist (17th March 2012).

The basic premise of the book is that reglion supplies lots of useful and supportive structures that atheists have rejected along with the supernatural. He writes that the origins of religion are based on the challenges of living in community and coping with the unpleasantness that life can throw at us. Religions therefore control, heal and console us. Religions provide structure to the inner life - choreographers of spiritual/psychological moments. Religions bind communities and remind people to be good and kind. Religions also state just how life is i.e. that it can be terrible and not everybody has it good.

Some aspects of religion may be accessible to non-believers and therefore invites the possibility of integrating practices, attitudes and states of mind into secular life.

And what of the atheists?  Why have they left it all behind? Because they cannot scientifically appreciate God. It does not make sense.

I have yet to read the whole book. I have listened to it a number of times while driving back and forth to Brighton and Heathrow airport over the summer months. I find that my memory for things - is better if I have actually seen it.  Well have been so busy with work and other things that I have onlly made it to page. But everybody knows the last line by now.

"Religions are intermittently too useful, effective and intelligent to be abandoned to the religious alone"

It is a fascinating read all 10 chapters
Wisedom without doctrine
Community
Kindness
Education
Tenderness
Pessimism
Perspective
Art
Architecture
Institutions
Posted by Lenz at 16:19 No comments:

So Sunday in April 2012 in Church in South Kensington. This afternoon I was serving in the HTB cafe for the five o'clock service. It was nice - all the cake, brownies and apple pie sold out. Fun afternoon, enjoyed the prayer time again. Although when we we asked to listen out for what God was telling us, I have to say I drew a blank, apart from four names of people, I barely know. Toby Flint, however has a picture of a man running the London marathon as strawberry. I shake my head in amusement/disbelief. However in seriousness I think he was trying the get across the point about be yourself. And for me, that meant about being authentic in all aspects of my life. 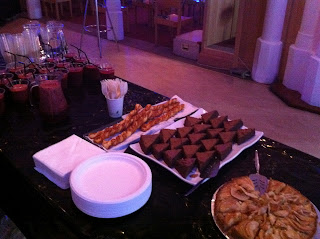 Brownies,smoothies, apple pie (cut by me...!)  and brownies. 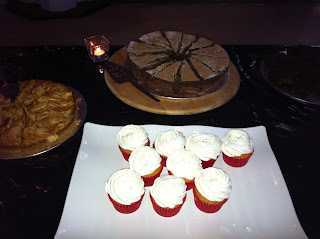 Cupcakes and chocolate cake (cut by me...!)


As for the service itself....Well - I really enjoyed the songs."Here For You" - Matt Redman, "This is our God" - Hillsong and "Amazing Grace" - John Newton among just a few that made me sing loudly (and out of key I think...!!) and with all my heart and soul with my hands raised. It was nice to focus on the goodness of God for a while.


The speaker was Jay Pathak. I think I was listening at the beginning and then was overwhelmed with tiredness! Ended up looking as though I had an avid interest in the floor but with my eyes closed.  So I am not sure what I gained or the world gained from me attending Church today. Guess I will have to listen to the sermon again on the podcast.
Posted by Lenz at 15:33 No comments: The only reason I have posted this, is because I am in it! You cannot see me because it is too dark but I know I am there! Was a really nice evening of worship and prayer.
Posted by Lenz at 15:32 No comments:

So the Easter Break is over and reality beckons. I actually had nice time. I was somewhat exhuasted after all the driving but it was all good all good!

Yesterday I went on a night tour of the Natural History Museum with a friend. It was amazingly cool! I am not sure why but I really enjoyed it. It was so interesting. Learning about Charles Darwin and the Origin of the Species, thinking about nature and evolution. It made me step out of the little world of work and mini-drama's that I normally inhabit. We had five mini-lectures, some more gripping than others. The first with the fish curator, second on sticklebacks and natural selection, third on the origins on of Man (out of Africa it seems!), fourth on beetles (never been so captivated about talk about creatures so small), and the fifth on Charles Darwin's book.  It was almost like a school trip but without the social anxiety that I used to feel on these outing - maybe something to be with being an adult and growing up!

It was interesting to know that some people around him [CD] did not think he was up to much and little was expected of him. However, that clearly was not the case. The guy was amazing! Makes me think that perhaps I ought to develop a passion and interest in my life. I guess my work does count - but I mean perhaps finding out new things, doing some research, moving forward.

So it has rekindled my interest in the museum. I think I am going to plan another trip their one weekend. I cannot wait! I did actually pop in a few months ago and found the whole thing fascinating. I did spend a lot time in taking pictures (on a facebook page near you!) and messing around with camera settings but it was all fun.

On my last visit I wandered through the Human Biology section, which of course as a doctor I found fascinating and reminded me of a few long forgotten facts and figures! Also just taken by the architecture of the building. The amazing detail in pillars inside and outside. Managed to see the 'monkey with the beard' - interesting!

Everytime I do go to the NHM, I remember the first time we went there as children. It was again so exciting - a trip out to central London, the Tube and all the drama that entails. Obviously the thing I remember the most was the dinosaur! Remember listening to a talk on the exstinction of the dinosaurs which my father recorded on a tape recorder - we still have that tape at home - although I remember very little of it now. Those were the days!

Well have to get back to reality now, work beckons.